skip to main | skip to sidebar

A Visit to Santa

Logan went to see Santa twice this weekend! He was more interested in the people walking by him then he was in Santa, but we were able to get his attention for a couple shots. This photo is taken of Logan and Santa in Westmoreland. We had a Christmas "extravaganza" in Westmoreland Saturday morning with craft booths, a silent auction, a cake walk, and games for the kids, and Santa, of course. We thought it was neat and enjoyed attending the festivities. Some of my kids were there and enjoyed meeting Logan. (We like his arm placement in this picture. When I went to pick him up, he had ahold of Santa's beard!) 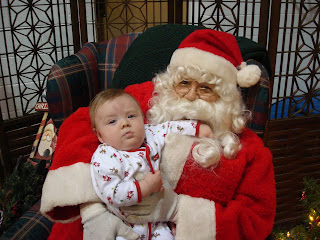 On another note, Logan rolled over from his back to his stomach tonight. He has been trying really hard for the past couple weeks, but tonight he did it! He had rolled on his side and was hanging out there for a while, and they all of sudden he kicked himself over. I was so excited I rolled him back over to see if he would do it again, and he did! Then we had to show dad, of course, and do it a couple more times just for the fun of it. He has rolled from his stomach to his back twice, but isn't as good at that quite yet. Logan is growing so quickly we can't hardly believe it! He will turn 4 months this week and Brian and I are both kind of sad about it... He definitely isn't a little baby anymore! We take him to the doctor next week to see just how big he is, but you can tell by the pictures that he is probably in the higher percentile...!


Here's a picture to start your Christmas week off right! 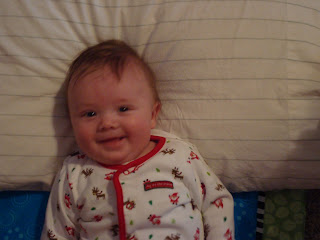 I will be spending today playing this new game....
(This is the first video I have ever uploaded and so I don't know how to turn it...)